EMCC Principal Psychotherapist and Head of Counselling, Ms Ng Ai Ling was interviewed for this article. Read her insights into why young people indulge in “revenge sleep procrastination” and how they can break the habit. 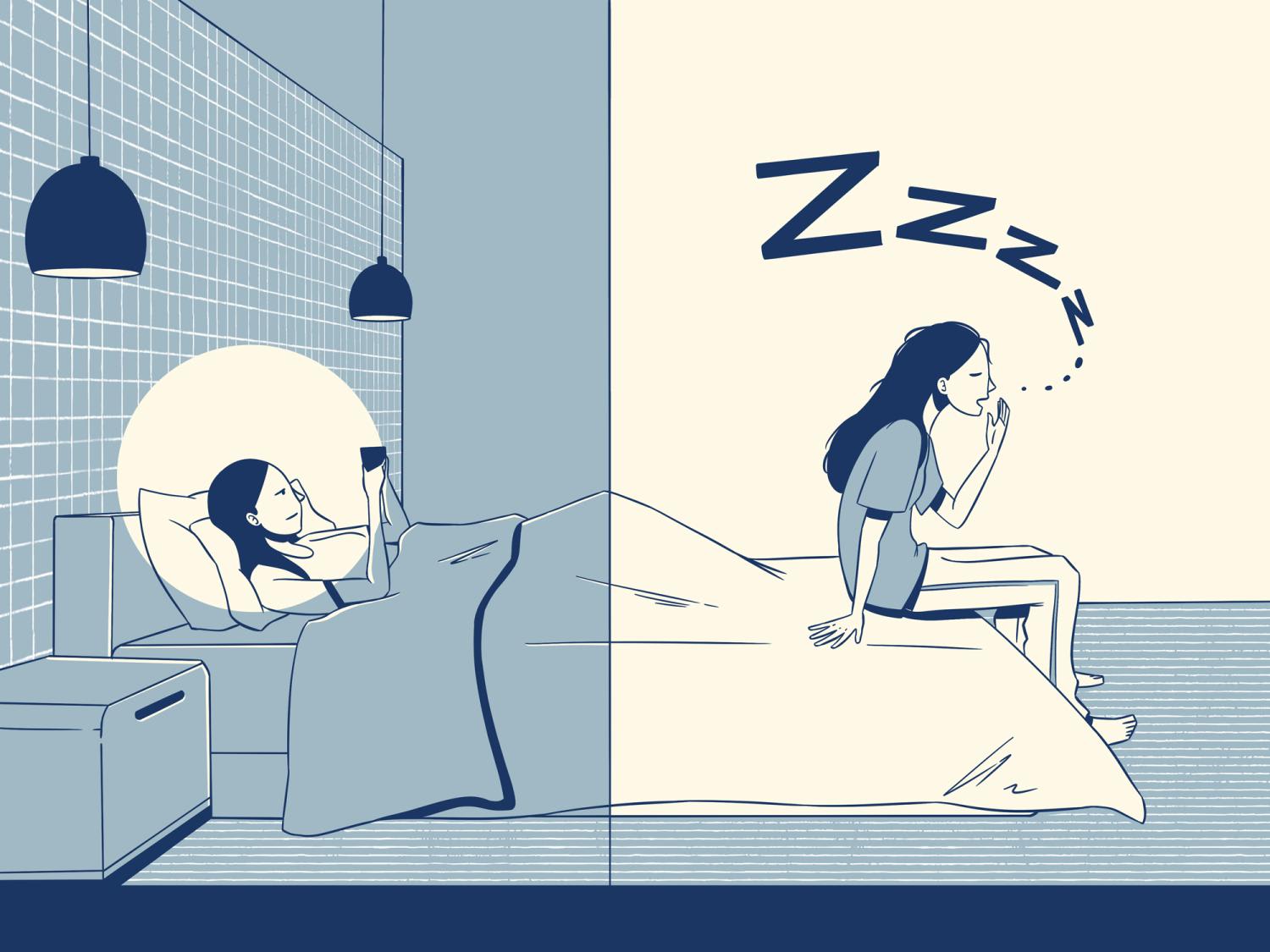 TODAY journalist Charlene Goh finds herself sleeping later after work so that she can squeeze
in more activities before bed, such as playing video games, scrolling through TikTok or watching YouTube videos of cute dogs.

Adulting 101: I take revenge on my lack of free time by delaying sleep at night, but I know it’s time to stop

Adulthood is an invigorating stage of life as young people join the workforce, take on more responsibilities and set their sights on the future. But its many facets — from managing finances and buying a home to achieving work-life balance — can be overwhelming.

In this series, TODAY’s journalists help young Singaporeans navigate this stage of their lives and learn something themselves in the process.

SINGAPORE — It’s 12am, I’m in bed watching the latest season of Stranger Things on Netflix and I have arrived yet again at the same dilemma I face every night: Do I hit the “next episode” button (this last one ended on another cliffhanger…) or do I pick the sensible option of switching off my lights and going to bed?

Unfortunately, most of the time, I choose the former, knowing full well that the happiness derived from watching another few episodes will come at a cost — waking up the next morning with a pounding headache and feeling like a zombie the entire day.

When I was a university student, sleeping late didn’t affect me as much since I had more control over my schedule. I signed up for classes that took place later in the day, and I could generally choose what time to wake up each day and finish my assignments.

Since I started working, though, I’ve had to give up that control — I don’t get to choose what news assignments to cover and some days, I might have to attend media briefings or rush down to the site of a breaking news event as early as 8am.

Since then, my sleep habits have deteriorated.

Now that I have less free time in the day, I find myself sleeping later so I can squeeze in more activities before bed, such as playing video games, scrolling through TikTok or watching YouTube videos of cute dogs.

And even though it’s taking a toll on my health, I can’t seem to help myself and I know I’m not the only one stuck in this loop.

A study by senior research fellow Stijn Massar and Dr Michael Chee from the Sleep and Cognition Laboratory at the National University of Singapore (NUS) found that out of the 321 adolescents, university students and staff they surveyed over the past two years, 55 per cent said that they frequently go to bed later than intended.

In an effort to figure out how to break my unhealthy patterns, I spoke to some experts.

The term “bedtime procrastination” was first used in 2014 by Dutch researchers to explain how a lack of self-discipline results in people sleeping later than intended.

Later, the word “revenge” was added to the term by users on Chinese social media, giving it a layer of extra meaning.

Dr Leow Leong Chai, director of the sleep disorders unit at Singapore General Hospital, said that “revenge bedtime procrastination” was coined to describe people who are so busy with work and other commitments that they do not have any time for activities that they enjoy.

“In other words, they take ‘revenge’ on their busy work and social life by knowingly procrastinating their bedtime so that they can do what they enjoy instead of going to sleep,” he added.

Agreeing, Dr Chee from NUS said that this is exacerbated by the pull of social media, which makes it difficult for people to put down their phones.

“People may want to spend a bit of ‘me time’ by using social media before bed, but the time just passes because the content that’s offered online is so compelling.”

Dr Chee is the director of Centre for Sleep and Cognition at the Yong Loo Lin School of Medicine in NUS.

He added that the sole goal of social media developers is to “capture your attention and hold it” and they “will find every way to hook you”.

“They aren’t going to think about your mental well-being and loss of sleep,” Dr Chee said.

This is something I personally struggle with and a friend I spoke to also mentioned that she uses Instagram to “wind down” before bed but ends up getting carried away with it.

“Screen time is so bad, I usually start to wind down at 11pm but before I know it, two hours have passed,” she said.

Other than revenge bedtime procrastination, certain people may delay sleeping because they find sleep to be a waste of time.

Ms Ng Ai Ling, the head of counselling and principal psychotherapist at Eagles Mediation and Counselling Centre, said: “For those who espouse the Fomo (fear of missing out) and Yolo (you only live once) philosophy, sleeping is an unproductive time during which they could be losing out to their peers.”

This fear drives them to work harder in order to keep up with others, which could be through pursuing social and leisure interests.

For others, an eagerness to achieve may drive them to sacrifice sleep, so that they can use the time to take on side gigs or part-time studies after their day job, she added.

WHAT IS THE UNDERLYING ISSUE?

In order to break the habit and start sleeping on time, Ms Ng suggested reflecting on these questions to help identify the underlying cause of bedtime procrastination:

“For example, the underlying issue may be a lack of clarity about your purpose in life. You could then address this by going for professional coaching or counselling, which would be more helpful than staying up late to scroll through social media,” she said.

These questions got me thinking as well and I realised that the weeks when I struggle the most with bedtime procrastination are the ones when I am more stressed at work.

This translates into staying up late in order to extend my “me time” and “delay” the next day from arriving, which is not a healthy way to manage stress.

HOW CAN I TURN INTO AN EARLY BIRD?

So what do I have to do differently?

For working adults, Dr Chee recommended going to bed before midnight so that they are able to have the recommended seven to eight hours of sleep. He added that having a healthy diet and sufficient exercise are also important.

Yet, we all know this is all easier said than done, and Dr Chee himself acknowledged that the problem is also a structural one, which requires a societal level change.

“In Singapore, we have a culture where work and personal time is blurred… As a boss myself, I try not to contact my staff after office hours as it will eat into their personal time,” he added.

When people are contacted about work outside of their office hours, they might sleep even later to make up for the lost free time.

Experts noted that sleep habits worsened as a result of the pandemic, because working from home eroded work-life boundaries.

To counter this, Ms Ng recommended that those who work from home set a routine to disengage from work daily. For example, one could leave home for a walk to simulate ending work for the day.

“During the walk, think about what you are going to do after that. The walk back will help to disengage you from work,” she said.

She added that keeping your bedroom as a resting space and working in the living room instead is another tangible way to separate work and rest.

A friend of mine has another good strategy to prevent work stress from affecting her sleep.

She said: “I see it more as energy management. If there’s an event or a deadline at work, I’ll try to work on it in advance so that I can sleep earlier the night before instead of stressing over it.”

This gives her enough energy to get through that important day, she said, adding that she regularly sleeps early because it feels really good to wake up fresh.

Although I am not quite there yet, I’ll try changing my habits step by step.

Perhaps I’ll try stopping the episode of my Netflix show midway — once the cliffhanger from the previous episode has been resolved — so I don’t get tempted to watch yet another episode when it inevitably ends on a cliffhanger.

This will be easier said than done, but I have to remind myself that the effort and discipline will be worth it. I look forward to the days when I wake up fresh and am able to fully enjoy my time after work, instead of feeling terribly exhausted the entire day.

Charlene Goh, 25, is a journalist with TODAY, covering health, sports, community and the arts.